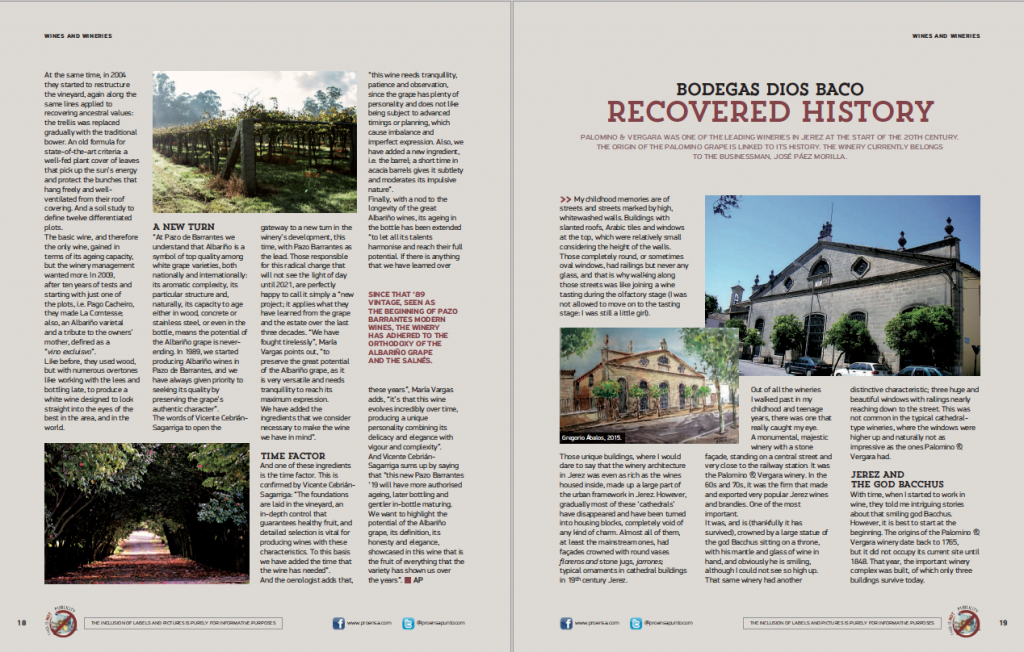 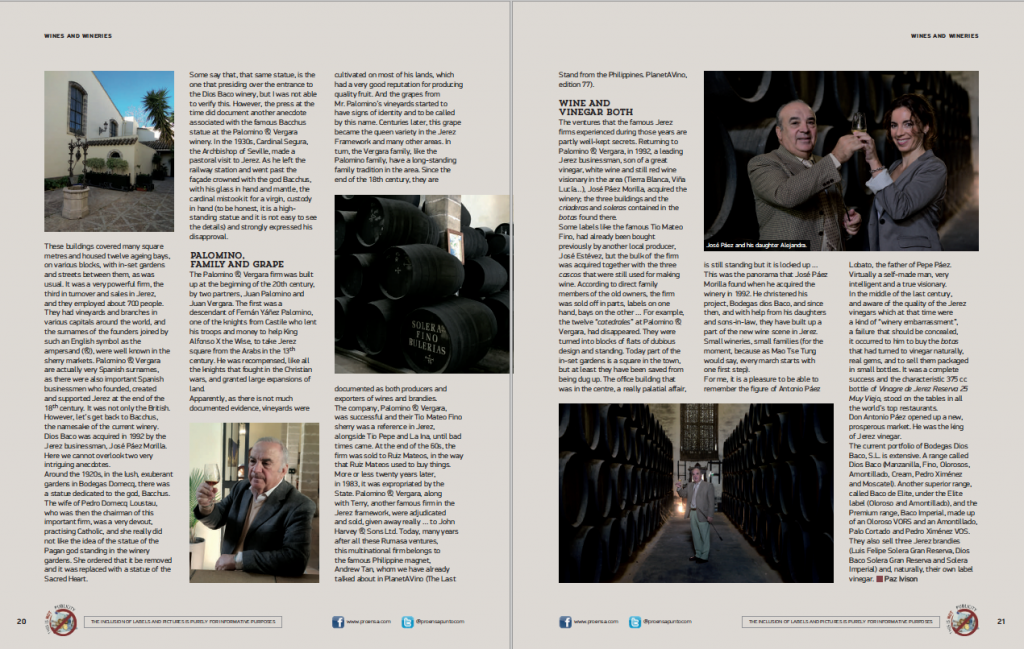 Palomino & Vergara was one of the leading wineries in Jerez at the start of the 20th century. The origin of the Palomino grape is linked to its history. The winery currently belongs to the businessman, José Páez Morilla.

My childhood memories are of streets and streets marked by high, whitewashed walls. Buildings with slanted roofs, Arabic tiles and windows at the top, which were relatively small considering the height of the walls. Those completely round, or sometimes oval windows, had railings but never any glass, and that is why walking along those streets was like joining a wine tasting during the olfactory stage (I was not allowed to move on to the tasting stage: I was still a little girl).

Those unique buildings, where I would dare to say that the winery architecture in Jerez was even as rich as the wines housed inside, made up a large part of the urban framework in Jerez. However, gradually most of these ‘cathedrals’ have disappeared and have been turned into housing blocks, completely void of any kind of charm. Almost all of them, at least the mainstream ones, had façades crowned with round vases floreros and stone jugs, jarrones; typical ornaments in cathedral buildings in 19th century Jerez.

Out of all the wineries I walked past in my childhood and teenage years, there was one that really caught my eye. A monumental, majestic winery with a stone façade, standing on a central street and very close to the railway station. It was the Palomino & Vergara winery. In the 60s and 70s, it was the firm that made and exported very popular Jerez wines and brandies. One of the most important.

It was, and is (thankfully it has survived), crowned by a large statue of the god Bacchus sitting on a throne, with his mantle and glass of wine in hand, and obviously he is smiling, although I could not see so high up. That same winery had another distinctive characteristic; three huge and beautiful windows with railings nearly reaching down to the street. This was not a common in the typical cathedral-type wineries, where the windows were higher up and naturally not as impressive as the ones Palomino & Vergara had.

Jerez and the god Bacchus

With time, when I started to work in wine, they told me intriguing stories about that smiling god Bacchus. However, it is best to start at the beginning. The origins of the Palomino & Vergara winery date back to 1765, but it did not occupy its current site until 1848. That year, the important winery complex was built, of which only three buildings survive today.

These buildings covered many square metres and housed twelve ageing bays, on various blocks, with in-set gardens and streets between them, as was usual. It was a very powerful firm, the third in turnover and sales in Jerez, and they employed about 700 people. They had vineyards and branches in various capitals around the world, and the surnames of the founders joined by such an English symbol as the ampersand (&), were well known in the sherry markets. Palomino & Vergara are actually very Spanish surnames, as there were also important Spanish businessmen who founded, created and supported Jerez at the end of the 18th century. It was not only the British.

However, let’s get back to Bacchus, the namesake of the current winery. Dios Baco was acquired in 1992 by the Jerez businessman, José Páez Morilla. Here we cannot overlook two very intriguing anecdotes.

Around the 1920s, in the lush, exuberant gardens in Bodegas Domecq, there was a statue dedicated to the god, Bacchus. The wife of Pedro Domecq Loustau, who was then the chairman of this important firm, was a very devout, practicing Catholic, and she really did not like the idea of the statue of the Pagan god standing in the winery gardens. She ordered that it be removed and it was replaced with a statue of the Sacred Heart.

Some say that, that same statue, is the one that presiding over the entrance to the Dios Baco winery, but I was not able to verify this. However, the press at the time did document another anecdote associated with the famous Bacchus statue at the Palomino & Vergara winery. In the 1930s, Cardinal Segura, the Archbishop of Seville, made a pastoral visit to Jerez. As he left the railway station and went past the façade crowned with the god Bacchus, with his glass in hand and mantle, the cardinal mistook it for a virgin, custody in hand (to be honest, it is a high-standing statue and it is not easy to see the details) and strongly expressed his disapproval.

The Palomino & Vergara firm was built up at the beginning of the 20th century, by two partners, Juan Palomino and Juan Vergara. The first was a descendant of Fernán Yáñez Palomino, one of the knights from Castile who lent his troops and money to help King Alfonso X the Wise, to take Jerez square from the Arabs in the 13th century. He was recompensed, like all the knights that fought in the Christian wars, and granted large expansions of land.

Apparently, as there is not much documented evidence, vineyards were cultivated on most of his lands, which had a very good reputation for producing quality fruit. And the grapes from Mr. Palomino’s vineyards started to have signs of identity and to be called by this name. Centuries later, this grape became the queen variety in the Jerez Framework and many other areas. In turn, the Vergara family, like the Palomino family, have a long-standing family tradition in the area. Since the end of the 18th century, they are documented as both producers and exports of wines and brandies.

The company, Palomino & Vergara, was successful and their Tio Mateo Fino sherry was a reference in Jerez, alongside Tio Pepe and La Ina, until bad times came. At the end of the 60s, the firm was sold to Ruiz Mateos, in the way that Ruiz Mateos used to buy things. More or less twenty years later, in 1983, it was expropriated by the State. Palomino & Vergara, along with Terry, another famous firm in the Jerez framework, were adjudicated and sold, given away really … to John Harvey & Sons Ltd. Today, many years after all these Rumasa ventures, this multinational firm belongs to the famous Philippine magnet, Andrew Tan, whom we have already talked about in PlanetAVino (The Last Stand from the Philippines. PlanetAVino, edition 77).

Wine and vinegar both

The ventures that the famous Jerez firms experienced during those years are partly well-kept secrets. Returning to Palomino & Vergara, in 1992, a leading Jerez businessman, son of a great vinegar, white wine and still red wine visionary in the area (Tierra Blanca, Viña Lucía…), José Páez Morilla, acquired the winery; the three buildings and the criaderas and soleras contained in the botas found there.

Some labels like the famous Tio Mateo Fino, had already been bought previously by another local producer, José Estévez, but the bulk of the firm was acquired together with the three cascos that were still used for making wine. According to direct family members of the old owners, the firm was sold off in parts, labels on one hand, bays on the other … For example, the twelve “catedrales” at Palomino & Vergara, had disappeared. They were turned into blocks of flats of dubious design and standing. Today part of the in-set gardens is a square in the town, but at least they have been saved from being dug up. The office building that was in the centre, a really palatial affair, is still standing but it is locked up …

This was the panorama that José Páez Morilla found when he acquired the winery in 1992. He christened his project, Bodegas dios Baco, and since then, and with help from his daughters and sons-in-law, they have built up a part of the new wine scene in Jerez. Small wineries, small families (for the moment, because as Mao Tse Tung would say, every march starts with one first step).

For me, it is a pleasure to be able to remember the figure of Antonio Páez Lobato, the father of Pepe Páez. Virtually a self-made man, very intelligent and a true visionary. In the middle of the last century, and aware of the quality of the Jerez vinegars which at that time were a kind of “winery embarrassment”, a failure that should be concealed, it occurred to him to buy the botas that had turned to vinegar naturally, real gems, and to sell them packaged in small bottles. It was a complete success and the characteristic 375 cc bottle of Vinagre de Jerez Reserva 25 Muy Viejo, stood on the tables in all the world’s top restaurants. Don Antonio Páez opened up a new, prosperous market. He was the king of Jerez vinegar.