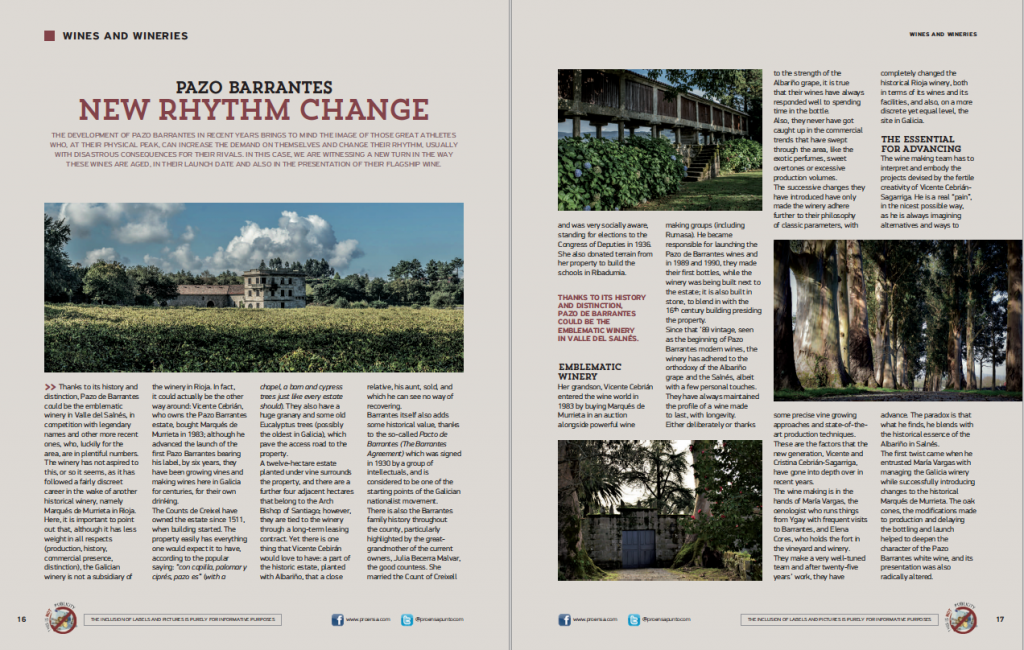 The development of Pazo Barrantes in recent years brings to mind the image of those great athletes who, at their physical peak, can increase the demand on themselves and change their rhythm, usually with disastrous consequences for their rivals. In this case, we are witnessing a new turn in the way these wines are aged, in their launch date and also in the presentation of their flagship wine.

Thanks to its history and distinction, Pazo de Barrantes could be the emblematic winery in Valle del Salnés, in competition with legendary names and other more recent ones, who, luckily for the area, are in plentiful numbers. The winery has not aspired to this, or so it seems, as it has followed a fairly discreet career in the wake of another historical winery, namely Marqués de Murrieta in Rioja.

Here, it is important to point out that, although it has less weight in all respects (production, history, commercial presence, distinction), the Galician winery is not a subsidiary of the winery in Rioja. In fact, it could actually be the other way around: Vicente Cebrián, who owns the Pazo Barrantes estate, bought Marqués de Murrieta in 1983; although he advanced the launch of the first Pazo Barrantes bearing his label, by six years, they have been growing vines and making wines here in Galicia for centuries, for their own drinking.

The Counts de Creixel have owned the estate since 1511, when building started. The property easily has everything one would expect it to have, according to the popular saying: “con capilla, palomar y ciprés, pazo es” (with a chapel, a barn and cypress trees just like every estate should). They also have a huge granary and some old Eucalyptus trees (possibly the oldest in Galicia), which pave the access road to the property.

A twelve-hectare estate planted under vine surrounds the property, and there are a further four adjacent hectares that belong to the Arch Bishop of Santiago; however, they are tied to the winery through a long-term leasing contract. Yet there is one thing that Vicente Cebirán would love to have: a part of the historic estate, planted with Albariño, that a close relative, his aunt, sold, and which he can see no way of recovering.

Barrantes itself also adds some historical value, thanks to the so-called Pacto de Barrantes (The Barrantes Agreement) which was signed in 1930 by a group of intellectuals, and is considered to be one of the starting points of the Galician nationalist movement. There is also the Barrantes family history throughout the county, particularly highlighted by the great-grandmother of the current owners, Julia Becerra Malvar, the good countess. She married the Count of Creixell and was very socially aware, standing for elections to the Congress of Deputies in 1936. She also donated terrain from her property to build the schools in Ribadumia.

Her grandson, Vicente Cebrián entered the wine world in 1983 by buying Marqués de Murrieta in an auction alongside powerful wine making groups (including Rumasa). He became responsible for launching the Pazo de Barrantes wines and in 1989 and 1990, they made their first bottles, while the winery was being built next to the estate; it is also built in stone, to blend in with the 16th century building presiding the property.

Since that ’89 vintage, seen as the beginning of Pazo Barrantes modern wines, the winery has adhered to the orthodoxy of the Albariño grape and the Salnés, albeit with a few personal touches. They have always maintained the profile of a wine made to last, with longevity. Either deliberately or thanks to the strength of the Albariño grape, it is true that their wines have always responded well to spending time in the bottle. Also, they never have got caught up in the commercial trends that have swept through the area, like the exotic perfumes, sweet overtones or excessive production volumes.

The successive changes they have introduced have only made the winery adhere further to their philosophy of classic parameters, with some precise vine growing approaches and state-of-the-art production techniques. These are the factors that the new generation, Vicente and Cristina Cebrián-Sagarriga, have gone into depth over in recent years.

The wine making is in the hands of María Vargas, the oenologist who runs things from Ygay with frequent visits to Barrantes, and Elena Cores, who holds the fort in the vineyard and winery. They make a very well-tuned team and after twenty-five years’ work, they have completely changed the historical Rioja winery, both in terms of its wines and its facilities, and also, on a more discrete yet equal level, the site in Galicia.

The essential for advancing

The wine making team has to interpret and embody the projects devised by the fertile creativity of Vicente Cebrián-Sagarriga. He is a real “pain”, in the nicest possible way, as he is always imagining alternatives and ways to advance. The paradox is that what he finds, he blends with the historical essence of the Albariño in Salnés.

The first twist came when he entrusted María Vargas with managing the Galicia winery while successfully introducing changes to the historical Marqués de Murrieta. The oak cones, the modifications made to production and delaying the bottling and launch helped to deepen the character of the Pazo Barrantes white wine, and its presentation was also radically altered.

At the same time, in 2004 they started to restructure the vineyard, again along the same lines applied to recovering ancestral values: the trellis was replaced gradually with the traditional bower. An old formula for state-of-the-art criteria: a well-fed plant cover of leaves that pick up the sun’s energy and protect the bunches that hang freely and well-ventilated from their roof covering. And a soil study to define twelve differentiated plots.

The basic wine, and therefore the only wine, gained in terms of its ageing capacity, but the winery management wanted more. In 2009, after ten years of tests and starting with just one of the plots, i.e. Pago Cacheiro, they made La Comtesse; also, an Albariño varietal and a tribute to the owners’ mother, defined as a “vino excluisvo”. Like before, they used wood, but with numerous overtones like working with the lees and bottling late, to produce a white wine designed to look straight into the eyes of the best in the area, and in the world.

“At Pazo de Barrantes we understand that Albariño is a symbol of top quality among white grape varieties, both nationally and internationally: its aromatic complexity, its particular structure and, naturally, its capacity to age either in wood, concrete or stainless steel, or even in the bottle, means the potential of the Albariño grape is never-ending. In 1989, we started producing Albariño wines in Pazo de Barrantes, and we have always given priority to seeking its quality by preserving the grape’s authentic character”.

The words of Vicente Cebrián-Sagarriga to open the gateway to a new turn in the winery’s development, this time, with Pazo Barrantes as the lead. Those responsible for this radical change that will not see the light of day until 2021, are perfectly happy to call it simply a “new project; it applies what they have learned from the grape and the estate over the last three decades. “We have fought tirelessly”, María Vargas points out, “to preserve the great potential of the Albariño grape, as it is very versatile and needs tranquillity to reach its maximum expression. We have added the ingredients that we consider necessary to make the wine we have in mind.”

And one of these ingredients is the time factor. This is confirmed by Vicente Cebrián-Sagarriga: “The foundations are laid in the vineyard, an in-depth control that guarantees healthy fruit, and detailed selection is vital for producing wines with these characteristics. To this basis we have added the time that the wine has needed”.

And the oenologist adds that, “this wine needs tranquillity, patience and observation, since the grape has plenty of personality and does not like being subject to advanced timings or planning, which cause imbalance and imperfect expression. Also, we have added a new ingredient, i.e. the barrel; a short time in acacia barrels gives it subtlety and moderates its impulsive nature.”

Finally, with a nod to the longevity of the great Albariño wines, its ageing in the bottle has been extended “to let all its talents harmonise and reach their full potential. If there is anything that we have learned over these years”, María Vargas adds, “it’s that this wine evolves incredibly over time, producing a unique personality combining its delicacy and elegance with vigour and complexity”.

And Vicente Cebrián-Sagarriga sums up by saying that “this new Pazo Barrantes ‘19 will have more authorised ageing, later bottling and gentler in-bottle maturing. We want to highlight the potential of the Albariño grape, its definition, its honesty and elegance, showcased in this wine that is the fruit of everything that the variety has shown us over the years”.