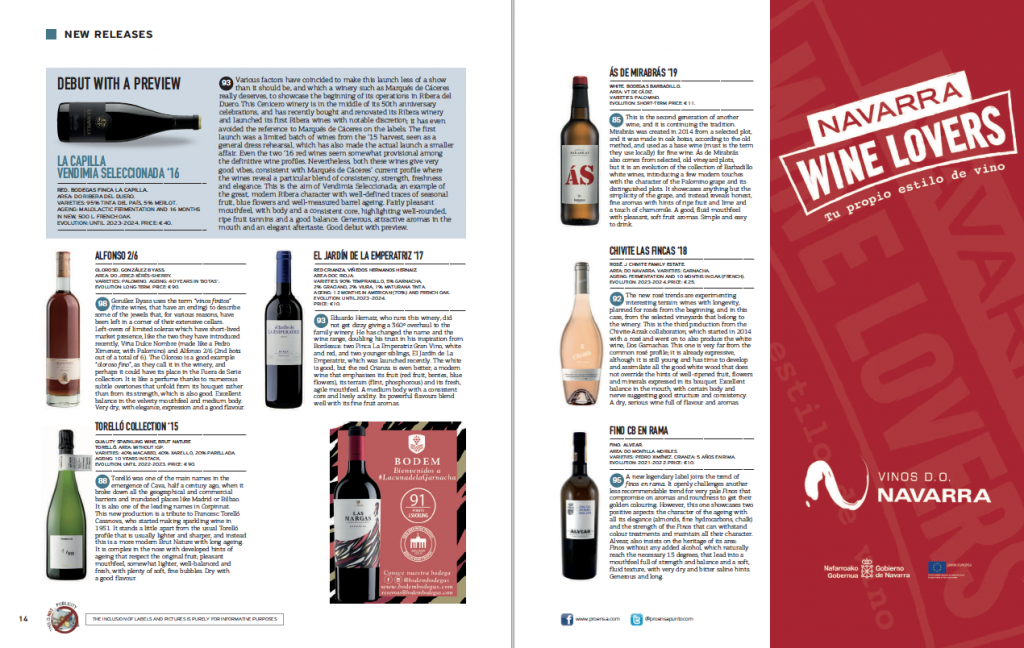 Debut with a preview

Various factors have coincided to make this launch less of a show than it should be, and which a winery such as Marqués de Cáceres really deserves, to showcase the beginning of its operations in Ribera del Duero. This Cenicero winery is in the middle of its 50th anniversary celebrations, and has recently bought and renovated its Ribera winery and launched its first Ribera wines with notable discretion; it has even avoided the reference to Marqués de Cáceres on the labels. The first launch was a limited batch of wines from the ‘15 harvest, seen as a general dress rehearsal, which has also made the actual launch a smaller affair. Even the two ‘16 red wines seem somewhat provisional among the definitive wine profiles.

Nevertheless, both these wines give very good vibes, consistent with Marqués de Cáceres’ current profile where the wines reveal a particular blend of consistency, strength, freshness and elegance. This is the aim of Vendimia Seleccionada; an example of the great, modern Ribera character with well-defined traces of seasonal fruit, blue flowers and well-measured barrel ageing. Fairly pleasant mouthfeel, with body and a consistent core, highlighting well-rounded, ripe fruit tannins and a good balance. Generous, attractive aromas in the mouth and an elegant aftertaste. Good debut with preview.

Torelló was one of the main names in the emergence of Cava, half a century ago, when it broke down all the geographical and commercial barriers and inundated places like Madrid or Bilbao. It is also one of the leading names in Corpinnat. This new production is a tribute to Francesc Torelló Casanova, who started making sparkling wine in 1951. It stands a little apart from the usual Torelló profile that is usually lighter and sharper, and instead this is a more modern Brut Nature with long ageing. It is complex in the nose with developed hints of ageing that respect the original fruit; pleasant mouthfeel, somewhat lighter, well-balanced and fresh, with plenty of soft, fine bubbles. Dry with a good flavour.

Eduardo Hernaiz, who runs this winery, did not get dizzy giving a 360º overhaul to the family winery. He has changed the name and the wine range, doubling his trust in his inspiration from Bordeaux: two Finca La Emperatriz Gran Vino, white and red, and two younger siblings, El Jardín de La Emperatriz, which was launched recently. The white is good, but the red Crianza is even better; a modern wine that emphasises its fruit (red fruit, berries, blue flowers), its terrain (flint, phosphorous) and its fresh, agile mouthfeel. A medium body with a consistent core and lively acidity. Its powerful flavours blend well with its fine fruit aromas.

This is the second generation of another wine, and it is continuing the tradition. Mirabrás was created in 2014 from a selected plot, and it was made in oak botas, according to the old method, and used as a base wine (must is the term they use locally) for a fine wine. Ás de Mirabrás also comes from selected, old vineyard plots, but it is an evolution of the collection of Barbadillo white wines, introducing a few modern touches with the character of the Palomino grape and its distinguished plots. It showcases anything but the simplicity of the grape, and instead reveals honest, fine aromas with hints of ripe fruit and lime and a touch of chamomile. A good, fluid mouthfeel with pleasant, soft fruit aromas. Simple and easy to drink.

Gonález Byass uses the term “vinos finitos” (finite wines, that have an ending) to describe some of the jewels that, for various reasons, have been left in a corner of their extensive cellars. Left-overs of limited soleras which have short-lived market presence, like the two they have introduced recently, Viña Dulce Nombre (made like a Pedro Ximenez, with Palomino) and Alfonso 2/6 (2nd bota out of a total of 6). The Oloroso is a good example “oloroso fino”, as they call it in the winery, and perhaps it could have its place in the Fuera de Serie collection. It is like a perfume thanks to numerous subtle overtones that unfold from its bouquet rather than from its strength, which is also good. Excellent balance in the velvety mouthfeel and medium body. Very dry, with elegance, expression and a good flavour.

The new rosé trends are experimenting interesting terrain: wines with longevity, planned for rosés from the beginning, and in this case, from the selected vineyards on the Legardeta estate that belongs to the winery. This is the third production from the Chivite-Arzak collaboration, which started in 2014 with a rosé and went on to also produce the white wine, Dos Garnachas. This one is very far from the common rosé profile; it is already expressive, although it is still young and has time to develop and assimilate all the good white wood that does not override the hints of well-ripened fruit, flowers and minerals expressed in its bouquet. Excellent balance in the mouth, with certain body and nerve suggesting good structure and consistency. A dry, serious wine full of flavour and aromas.

A new legendary label joins the trend of finos en rama. It openly challenges another less recommendable trend for very pale Finos that compromise on aromas and roundness to get their golden colouring. However, this one showcases two positive aspects: the character of the ageing with all its elegance (almonds, fine hydrocarbons, chalk) and the strength of the Finos that can withstand colour treatments and maintain all their character. Alvear, also insists on the heritage of its area: Finos without any added alcohol, which naturally reach the necessary 15 degrees, that lead into a mouthfeel full of strength and balance and a soft, fluid texture, with very dry and bitter saline hints. Generous and long.