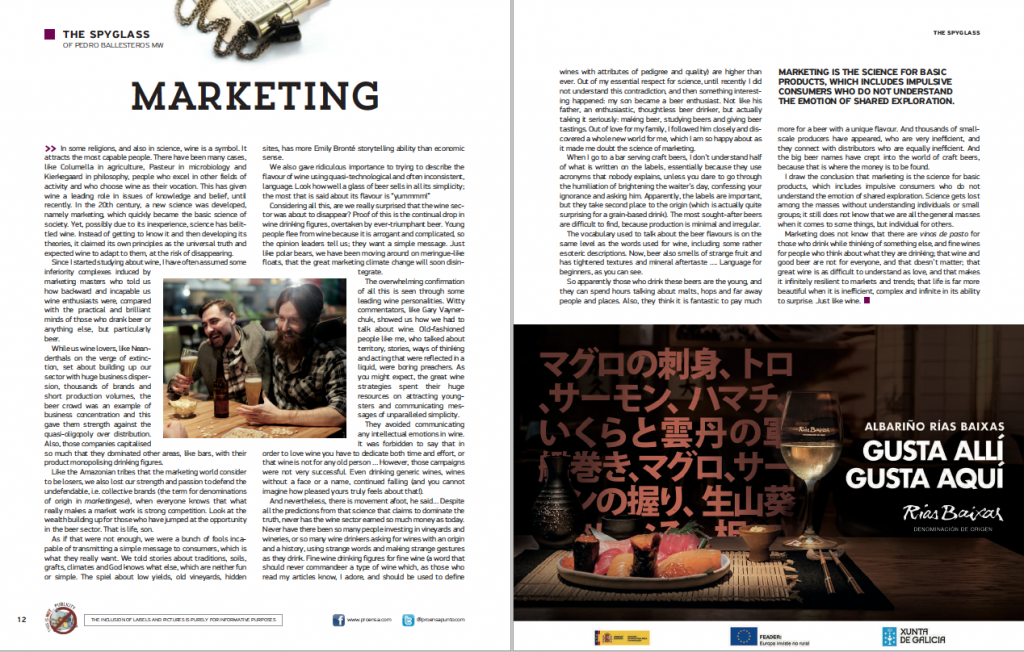 In some religions, and also in science, wine is a symbol. It attracts the most capable people. There have been many cases, like Columella in agriculture, Pasteur in microbiology and Kierkegaard in philosophy, people who excel in other fields of activity and who choose wine as their vocation. This has given wine a leading role in issues of knowledge and belief, until recently.

In the 20th century, a new science was developed, namely marketing, which quickly became the basic science of society. Yet, possibly due to its inexperience, science has belittled wine. Instead of getting to know it and then developing their theories, it claimed its own principles as the universal truth and expected wine to adapt to them, at the risk of disappearing.

Since I started studying about wine, I have often assumed some inferiority complexes induced by marketing masters who told us how backward and incapable us wine enthusiasts were, compared with the practical and brilliant minds of those who drank beer or anything else, but particularly beer.

While us wine lovers, like Neanderthals on the verge of extinction, set about building up our sector with huge business dispersion, thousands of brands and short production volumes, the beer crowd was an example of business concentration and this gave them strength against the quasi-oligopoly over distribution. Also, those companies capitalised so much that they dominated other areas, like bars, with their product monopolising drinking figures.

Like the Amazonian tribes that the marketing world consider to be losers, we also lost our strength and passion to defend the undefendable, i.e. collective brands (the term for denominations of origin in marketingese), when everyone knows that what really makes a market work is strong competition. Look at the wealth building up for those who have jumped at the opportunity in the beer sector. That is life, son.

As if that were not enough, we were a bunch of fools incapable of transmitting a simple message to consumers, which is what they really want. We told stories about traditions, soils, grafts, climates and God knows what else, which are neither fun or simple. The spiel about low yields, old vineyards, hidden sites, has more Emily Bronté storytelling ability than economic sense.

We also gave ridiculous importance to trying to describe the flavour of wine using quasi-technological and often inconsistent, language. Look how well a glass of beer sells in all its simplicity; the most that is said about its flavour is “yummmm!”

Considering all this, are we really surprised that the wine sector was about to disappear? Proof of this is the continual drop in wine drinking figures, overtaken by ever-triumphant beer. Young people flee from wine because it is arrogant and complicated, so the opinion leaders tell us; they want a simple message. Just like polar bears, we have been moving around on meringue-like floats, that the great marketing climate change will soon disintegrate.

The overwhelming confirmation of all this is seen through some leading wine personalities. Witty commentators, like Gary Vaynerchuk, showed us how we had to talk about wine. Old-fashioned people like me, who talked about territory, stories, ways of thinking and acting that were reflected in a liquid, were boring preachers. As you might expect, the great wine strategies spent their huge resources on attracting youngsters and communicating messages of unparalleled simplicity.

They avoided communicating any intellectual emotions in wine. It was forbidden to say that in order to love wine you have to dedicate both time and effort, or that wine is not for any old person … However, those campaigns were not very successful. Even drinking generic wines, wines without a face or a name, continued falling (and you cannot imagine how pleased yours truly feels about that!).

And nevertheless, there is movement afoot, he said … Despite all the predictions from that science that claims to dominate the truth, never has the wine sector earned so much money as today. Never have there been so many people investing in vineyards and wineries, or so many wine drinkers asking for wines with an origin and a history, using strange words and making strange gestures as they drink. Fine wine drinking figures (a word that should never hijack a type of wine which, as those who read my articles know, I adore, and should be used to define wines with attributes of pedigree and quality) are higher than ever.

Out of my essential respect for science, until recently I did not understand this contradiction, and then something interesting happened: my son became a beer enthusiast. Not like his father, an enthusiastic, thoughtless beer drinker, but actually taking it seriously: making beer, studying beers and giving beer tastings. Out of love for my family, I followed him closely and discovered a whole new world for me, which I am so happy about as it made me doubt the science of marketing.

When I go to a bar serving craft beers, I don’t understand half of what is written on the labels, essentially because they use acronyms that nobody explains, unless you dare to go through the humiliation of brightening the waiter’s day, confessing our ignorance and asking him. Apparently, the labels are important, but they take second place to the origin (which is actually quite surprising for a grain-based drink). The most sought-after beers are difficult to find, because production is minimal and irregular.

The vocabulary used to talk about the beer flavours is on the same level as the words used for wine, including some rather esoteric descriptions. Now, beer also smells of strange fruit and has tightened textures and mineral aftertaste …. Language for beginners, as you can see.

So apparently those who drink these beers are the young, and they can spend hours talking about malts, hops and far away people and places. Also, they think it is fantastic to pay much more for a beer with a unique flavour. And thousands of small-scale producers have appeared, who are very inefficient, and they connect with distributors who are equally inefficient. And the big beer names have crept into the world of craft beers, because that is where the money is to be found.

I draw the conclusion that marketing is the science for basic products, which includes impulsive consumers who do not understand the emotion of shared exploration, and gets lost among the masses without understanding individuals or small groups; it still does not know that we are all the general masses when it comes to some things, but individual for others.

Marketing does not know that there are vinos de pasto for those who drink while thinking of something else, and fine wines for people who think about what they are drinking. Wine and good beer are not for everyone, and that doesn’t matter. That great wine is as difficult to understand as love, and that makes it infinitely resilient to markets and trends. That life is far more beautiful when it is inefficient, complex and infinite in its ability to surprise. Just like wine.