Proensa – El Toque del Quera – So, what happens after Covid 19?

El Toque del Quera – So, what happens after Covid 19?

El Toque del Quera – So, what happens after Covid 19? 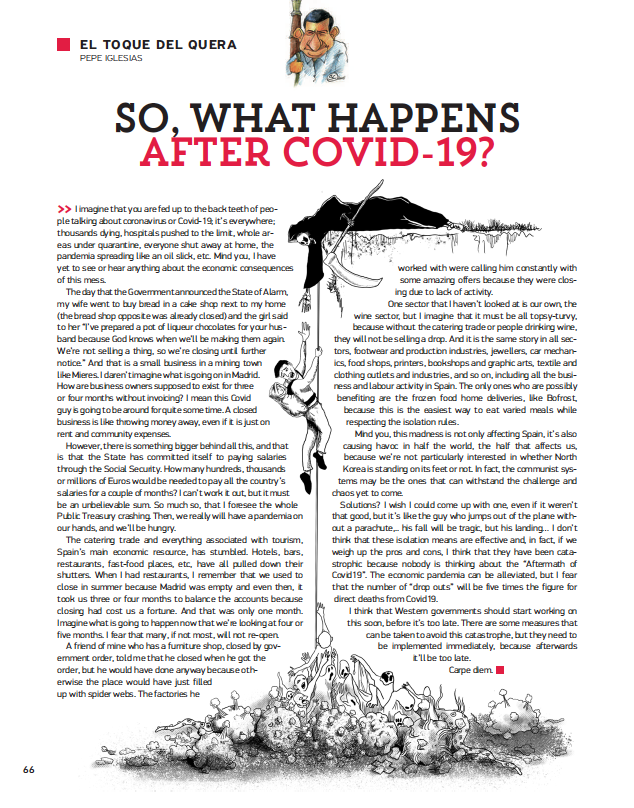 I imagine that you are fed up to the back teeth of people talking about coronavirus or Covid-19; it’s everywhere; thousands dying, hospitals pushed to the limit, whole areas under quarantine, everyone shut away at home, the pandemia spreading like an oil slick, etc. Mind you, I have yet to see or hear anything about the economic consequences of this mess.

The day that the Government announced the State of Alarm, my wife went to buy bread in a cake shop next to my home (the bread shop opposite was already closed) and the girl said to her “I’ve prepared a pot of liqueur chocolates for your husband because God knows when we’ll be making them again. We’re not selling a thing, so we’re closing until further notice.” And that is a small business in a mining town like Mieres. I daren’t imagine what is going on in Madrid. How are business owners supposed to exist for three or four months without invoicing? I mean this Covid guy is going to be around for quite some time. A closed business is like throwing money away, even if it is just on rent and community expenses.

However, there is something bigger behind all this, and that is that the State has committed itself to paying salaries through the Social Security. How many hundreds, thousands or millions of Euros would be needed to pay all the country’s salaries for a couple of months? I can’t work it out, but it must be an unbelievable sum. So much so, that I foresee the whole Public Treasury crashing. Then, we really will have a pandemia on our hands, and we’ll be hungry.

The catering trade and everything associated with tourism, Spain’s main economic resource, has stumbled. Hotels, bars, restaurants, fast-food places, etc, have all pulled down their shutters. When I had restaurants, I remember that we used to close in summer because Madrid was empty and even then, it took us three or four months to balance the accounts because closing had cost us a fortune. And that was only one month. Imagine what is going to happen now that we’re looking at four or five months. I fear that many, if not most, will not re-open.

A friend of mine who has a furniture shop, closed by government order, told me that he closed when he got the order, but he would have done anyway because otherwise the place would have just filled up with spider webs. The factories he worked with were calling him constantly with some amazing offers because they were closing due to lack of activity.

One sector that I haven’t looked at is our own, the wine sector, but I imagine that it must be all topsy-turvy, because without the catering trade or people drinking wine, they will not be selling a drop.

And it is the same story in all sectors, footwear and production industries, jewellers, car mechanics, food shops, printers, bookshops and graphic arts, textile and clothing outlets and industries, and so on, including all the business and labour activity in Spain. The only ones who are possibly benefiting are the frozen food home deliveries, like Bofrost, because this is the easiest way to eat varied meals while respecting the isolation rules.

Mind you, this madness is not only affecting Spain, it’s also causing havoc in half the world, the half that affects us, because we’re not particularly interested in whether North Korea is standing on its feet or not. In fact, the communist systems may be the ones that can withstand the challenge and chaos yet to come.

And to top it all, we have the most useless leaders in history, because if Sánchez is a pumpkin head, words fail me when it comes to Trump. That mop of straw that brazenly declared that Covid was a story, just like global warming. And the most tragic of all is that if new elections were held, he would win again. The Americans must be as silly as the Catalans, as even though their leaders trick them, they still vote for them.

Solutions? I wish I could come up with one, even if it weren’t that good, but it’s like the guy who jumps out of the plane without a parachute,.. his fall will be tragic, but his landing …. …

I don’t think that these isolation means are effective and, in fact, if we weigh up the pros and cons, I think that they have been catastrophic because nobody is thinking about the “Aftermath of Covid19”. The economic pandemia can be alleviated, but I fear that the number of “drop outs” will be five times the figure for direct deaths from Covid19.

I think that Western governments should start working on this soon, before it’s too late. There are some measures that can be taken to avoid this catastrophe, but they need to be implemented immediately, because afterwards it’ll be too late.