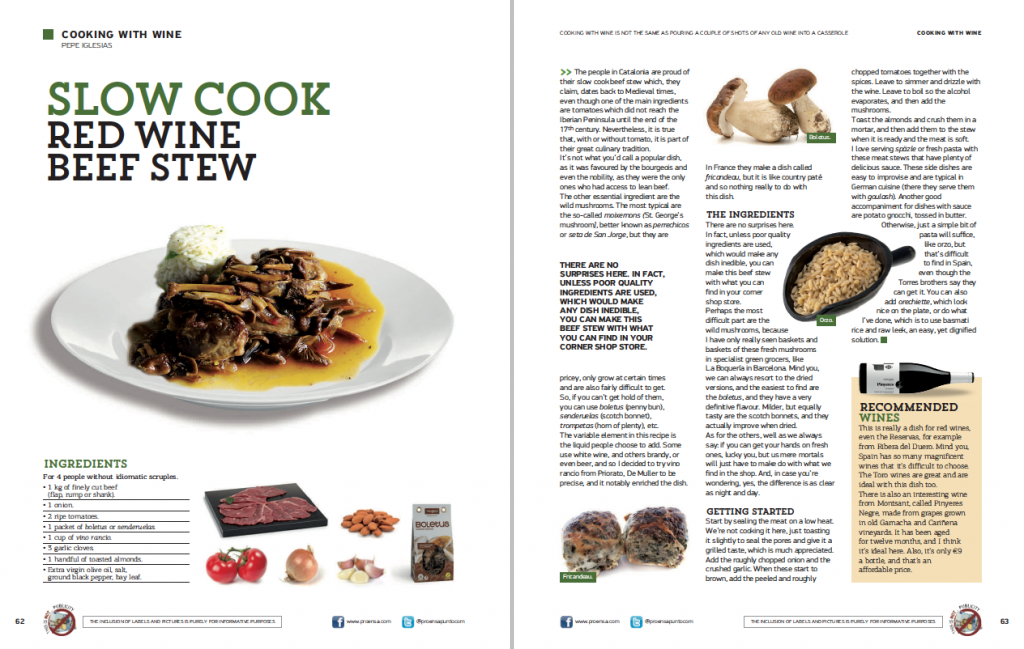 The people in Catalonia are proud of their slow cook beef stew which, they claim, dates back to Medieval times, even though one of the main ingredients are tomatoes which did not reach the Iberian Peninsula until the end of the 17th century. Nevertheless, it is true that, with or without tomato, it is part of their great culinary tradition.

It’s not what you’d call a popular dish, as it was favoured by the bourgeois and even the nobility, as they were the only ones who had access to lean beef. The other essential ingredient are the wild mushrooms. The most typical are the so-called moixernons (St. George’s mushroom], better known as perrechicos or seta de San Jorge, but they are pricey, only grow at certain times and are also fairly difficult to get. So, if you can’t get hold of them, you can use boletus (penny bun), senderuelas (scotch bonnet), trompetas (horn of plenty), etc..

The variable element in this recipe is the liquid people choose to add. Some use white wine, and others brandy, or even beer, and so I decided to try vino rancio from Priorato, De Muller to be precise, and it notably enriched the dish.

In France they make a dish called fricandeau, but it is like country paté and so nothing really to do with this dish.

There are no surprises here. In fact, unless poor quality ingredients are used, which would make any dish inedible, you can make this beef stew with what you can find in your corner shop store.

Perhaps the most difficult part are the wild mushrooms, because I have only really seen baskets and baskets of these fresh mushrooms in specialist green grocers, like La Boquería in Barcelona. Mind you, we can always resort to the dried versions, and the easiest to find are the boletus, and they have a very definitive flavour. Milder, but equally tasty are the scotch bonnets, and they actually improve when dried.

As for the others, well as we always say: if you can get your hands on fresh ones, lucky you, but us mere mortals will just have to make do with what we find in the shop. And, in case you’re wondering, yes, the difference is as clear as night and day.

For 4 people without idiomatic scruples

• 1 packet of boletus or senderuelas

Start by sealing the meat on a low heat. We’re not cooking it here, just toasting it slightly to seal the pores and give it a grilled taste, which is much appreciated.

Add the roughly chopped onion and the crushed garlic. When these start to brown, add the peeled and roughly chopped tomatoes together with the spices. Leave to simmer and drizzle with the wine. Leave to boil so the alcohol evaporates, and then add the mushrooms.

Toast the almonds and crush them in a mortar, and then add them to the stew when it is ready and the meat is soft.

I love serving späzle or fresh pasta with these meat stews that have plenty of delicious sauce. These side dishes are easy to improvise and are typical in German cuisine (there they serve them with goulash). Another good accompaniment for dishes with sauce are potato gnocchi, tossed in butter. Otherwise, just a simple bit of pasta will suffice, like orzo, but that’s difficult to find in Spain, even though the Torres brothers say they can get it. You can also add orechiette, which look nice on the plate, or do what I’ve done, which is to use basmati rice and raw leek, an easy, yet dignified solution.

This is really a dish for red wines, even the Reservas, for example from Ribera del Duero. Mind you, Spain has so many magnificent wines that it’s difficult to choose. The Toro wines are great and are ideal with this dish too.

There is also an interesting wine from Montsant, called Pinyeres Negre, made from grapes grown in old Garnacha and Cariñena vineyards. It has been aged for twelve months, and I think it’s ideal here. Also, it’s only €9 a bottle, and that’s an affordable price.