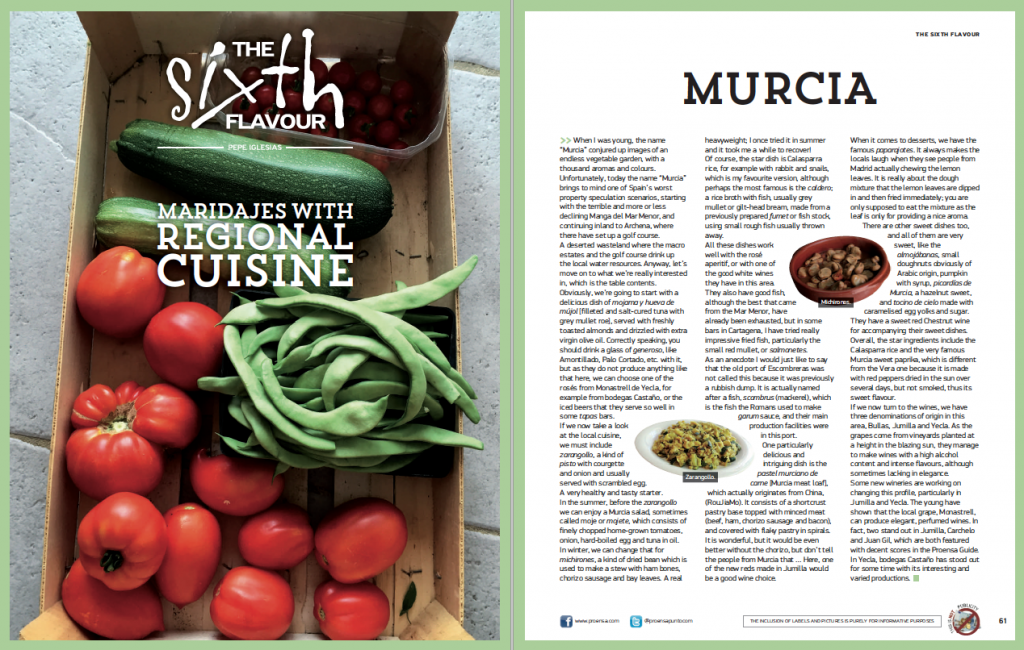 When I was young, the name “Murcia” conjured up images of an endless vegetable garden, with a thousand aromas and colours. Unfortunately, today the name “Murcia” brings to mind one of Spain’s worst property speculation scenarios, starting with the terrible and more or less declining Manga del Mar Menor, and continuing inland to Archena, where there have set up a golf course, called Altorreal, an abominable creation with the streets are limited by blocks of houses. A deserted wasteland where the macro estates and the golf course drink up the local water resources, and also those brought from the Segura river.

Anyway, let’s move on to what we’re really interested in, which is the table contents.

Obviously, we’re going to start with a delicious dish of mojama y hueva de mújol [filleted and salt-cured tuna with grey mullet roe], served with freshly toasted almonds and drizzled with extra virgin olive oil. Correctly speaking, you should drink a glass of generoso, like Amontillado, Palo Cortado, etc. with it, but as they do not produce anything like that here, we can choose one of the rosés from Monastrell de Yecla, for example from bodegas Castaño, or the iced beers that they serve so well in some tapas bars.

If we now take a look at the local cuisine, we must include zarangollo, a kind of pisto with courgette and onion and usually served with scrambled egg. A very healthy and tasty starter. In the summer, before the zarangollo we can enjoy a Murcia salad, sometimes called moje or mojete, which consists of finely chopped home-grown tomatoes, onion, hard-boiled egg and tuna in oil.

In winter, we can change that for michirones, a kind of dried bean which is used to make a stew with ham bones, chorizo sausage and bay leaves. A real heavyweight; I once tried it in summer and it took me a while to recover!

Of course, the star dish is Calasparra rice, for example with rabbit and snails, which is my favourite version, although perhaps the most famous is the caldero; a rice broth with fish, usually grey mullet or gilt-head bream, made from a previously prepared fumet or fish stock, using small rough fish usually thrown away.

All these dishes work well with the rosé aperitif, or with one of the good white wines they have in this area.

They also have good fish, although the best that came from the Mar Menor, have already been exhausted, but in some bars in Cartagena, I have tried really impressive fried fish, particularly the small red mullet, or salmonetes.

As an anecdote I would just like to say that the old port of Escombreras was not called this because it was previously a rubbish dump. It is actually named after a fish, scombrus (mackerel), which is the fish the Romans used to make garum sauce, and their main production facilities were in this port.

One particularly delicious and intriguing dish is the pastel murciano de carne [Murcia meat loaf], which actually originates from China, (RouJiaMo – 肉夹馍). It consists of a shortcrust pastry base topped with minced meat (beef, ham, chorizo sausage and bacon), and covered with flaky pastry in spirals. It is wonderful, but it would be even better without the chorizo, but don’t tell the people from Murcia that … Here, one of the new reds made in Jumilla would be a good wine choice.

When it comes to desserts, we have the famous paparajotes. It always makes the locals laugh when they see people from Madrid actually chewing the lemon leaves. It is really about the dough mixture that the lemon leaves are dipped in and then fried immediately; you are only supposed to eat the mixture as the leaf is only for providing a nice aroma.

There are other sweet dishes too, and all of them are very sweet, like the almojábanas, small doughnuts obviously of Arabic origin, pumpkin with syrup, picardías de Murcia, a hazelnut sweet, and tocino de cielo made with caramelised egg yolks and sugar.

They have a sweet red Chestnut wine for accompanying their sweet dishes.

Overall, the star ingredients include the Calasparra rice and the very famous Murcia sweet paprika, which is different from the Vera one because it is made with red peppers dried in the sun over several days, but not smoked, thus its sweet flavour.

If we now turn to the wines, we have three denominations of origin in this area, Bullas, Jumilla and Yecla. As the grapes come from vineyards planted at a height in the blazing sun, they manage to make wines with a high alcohol content and intense flavours, although sometimes lacking in elegance.

Some new wineries are working on changing this profile, particularly in Jumilla and Yecla, but most of the production maintains this style. The young have shown that the local grape, Monastrell, can produce elegant, perfumed wines. In fact, two stand out in Jumilla, Carchelo and Juan Gil, which are both featured with decent scores in the Proensa Guide. In Yecla, bodegas Castaño has stood out for some time with its interesting and varied productions.