Proensa – Living off the vines

Living off the vines

Living off the vines 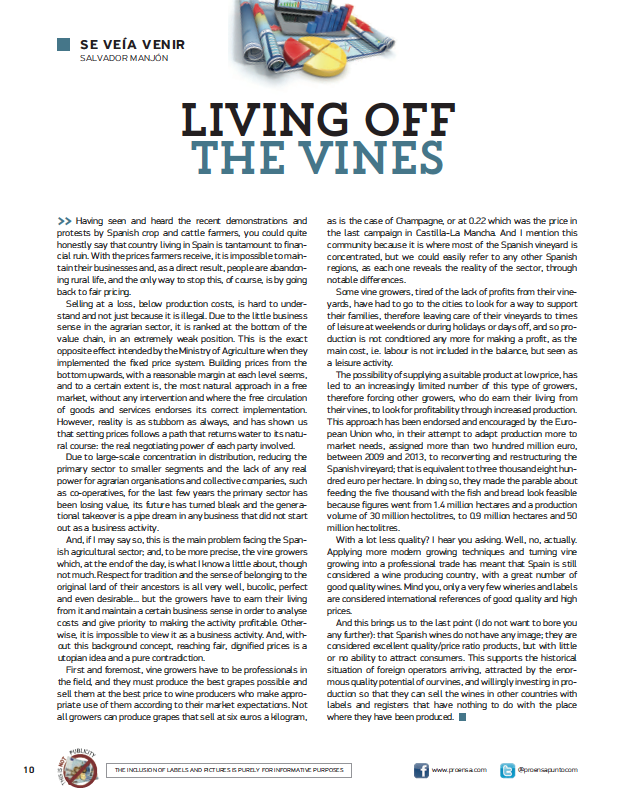 Having seen and heard the recent demonstrations and protests by Spanish crop and cattle farmers, you could quite honestly say that country living in Spain is tantamount to financial ruin. With the prices farmers receive, it is impossible to maintain their businesses and, as a direct result, people are abandoning rural life, and the only way to stop this, of course, is by going back to fair pricing.

Selling at a loss, below production costs, is hard to understand and not just because it is illegal. Due to the little business sense in the agrarian sector, it is ranked at the bottom of the value chain, in an extremely weak position. This is the exact opposite effect intended by the Ministry of Agriculture when they implemented the fixed price system. Building prices from the bottom upwards, with a reasonable margin at each level seems, and to a certain extent is, the most natural approach in a free market, without any intervention and where the free circulation of goods and services endorses its correct implementation. However, reality is as stubborn as always, and has shown us that setting prices follows a path that returns water to its natural course: the real negotiating power of each party involved.

Due to large-scale concentration in distribution, reducing the primary sector to smaller segments and the lack of any real power for agrarian organisations and collective companies, such as co-operatives, for the last few years the primary sector has been losing value, its future has turned bleak and the generational takeover is a pipe dream in any business that did not start out as a business activity.

And, if I may say so, this is the main problem facing the Spanish agricultural sector; and, to be more precise, the vine growers which, at the end of the day, is what now a little about, though not much. Respect for tradition and the sense of belonging to the original land of their ancestors is all very well, bucolic, perfect and even desirable… but the growers have to earn their living from it and maintain a certain business sense in order to analyse costs and give priority to making the activity profitable. Otherwise, it is impossible to view it as a business activity. And, without this background concept, reaching fair, dignified prices is a utopian idea and a pure contradiction.

First and foremost, vine growers have to be professionals in the field, and they must produce the best grapes possible and sell them at the best price to wine producers who make appropriate use of them according to their market expectations. Not all growers can produce grapes that sell at six euros a kilogram, as is the case of Champagne, or at 0.22 which was the price in the last campaign in Castilla-La Mancha. And I mention this community because it is where most of the Spanish vineyard is concentrated, but we could easily refer to any other of Spanish regions, as in each one we find the reality of the sector revealed through notable differences.

Some vine growers, tired of the lack of profits from their vineyards, have had to go to the cities to look for a way to support their families, therefore leaving care of their vineyards to times of leisure at weekends or during holidays or days off, and so production is not conditioned any more for making a profit, as the main cost, i.e. labour is not included in the balance, but seen as a leisure activity.

The possibility of supplying a suitable product at low price, has led to an increasingly limited number of this type of growers, therefore forcing other growers, who do earn their living from their vines, to look for profitability through increased production. This approach has been endorsed and encouraged by the European Union who, in their attempt to adapt production more to market needs, assigned more than two hundred million euro, between 2009 and 2013, to reconverting and restructuring the Spanish vineyard; that is equivalent to three thousand eight hundred euro per hectare. In doing so, they made the parable about feeding the five thousand with the fish and bread look feasible because figures went from 1.4 million hectares and a production volume of 30 million hectolitres, to 0.9 million hectares and 50 million hectolitres.

With a lot less quality? I hear you asking. Well, no, actually. Applying more modern growing techniques and turning vine growing into a professional trade has meant that Spain is still considered a wine producing country, with a great number of good quality wines. Mind you, only a very few wineries and labels are considered international references of good quality and high prices.

And this brings us to the last point (I do not want to bore you any further): that Spanish wines do not have any image; they are considered excellent quality/price ratio products, but with little or no ability to attract consumers. This supports the historical situation of foreign operators arriving, attracted by the enormous quality potential of our vines, and willingly investing in production so that they can sell the wines in other countries with labels and registers that have nothing to do with the place where they have been produced.