Proensa – Message in a bottle – Red wine is yellow

Message in a bottle – Red wine is yellow

Message in a bottle – Red wine is yellow 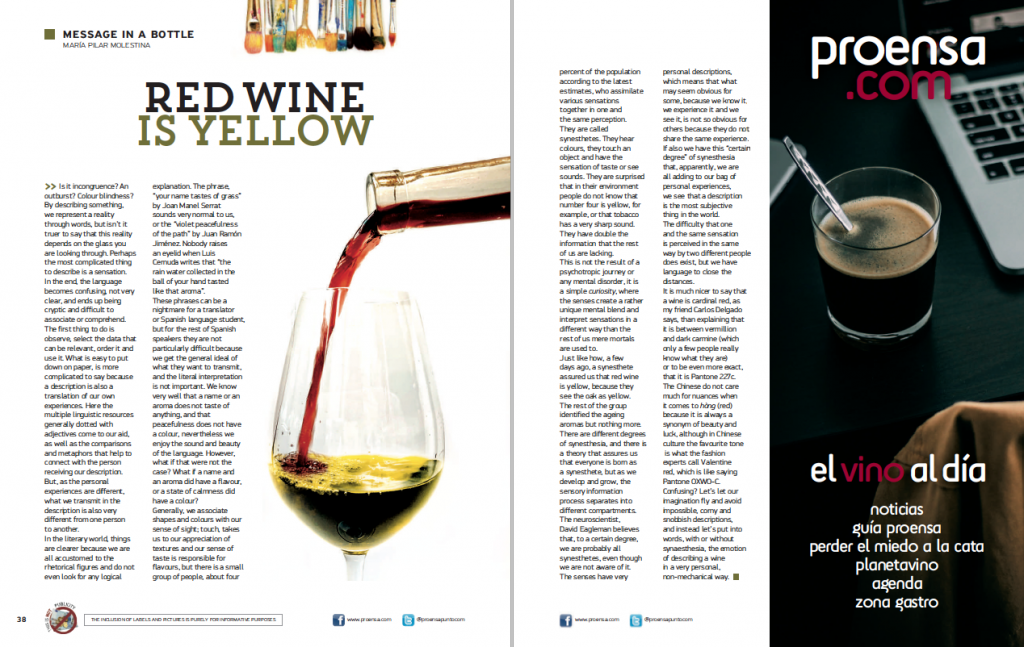 Is it incongruence? An outburst? Colour blindness? By describing something, we represent a reality through words, but isn’t it truer to say that this reality depends on the glass you are looking through. Perhaps the most complicated thing is to describe is a sensation. In the end, the language becomes confusing, not very clear, and ends up being cryptic and difficult to associate or comprehend. The first thing to do is observe, select the data that can be relevant, order it and use it. What is easy to say on paper, is more complicated to say because a description is also a translation of our own experiences. For this, the multiple linguistic resources generally dotted with adjectives come to our aid, as well as the comparisons and metaphors that help to connect with the person receiving our description. But, as the personal experiences are different, what we transmit in the description is also very different from one person to another.

In the literary world, things are clearer because we are all accustomed to the rhetorical figures and do not even look for any logical explanation. The phrase, “your name tastes of grass” by Joan Manel Serrat sounds very normal to us, or the “violet peacefulness of the path” by Juan Ramón Jiménez. Nobody raises an eyelid when Luis Cernuda writes that “the rain water collected in the ball of your hand tasted like that aroma”.

These phrases can be a nightmare for a translator or Spanish language student, but for the rest of Spanish speakers they are not particularly difficult because we get the general ideal of what they want to transmit, and the literal interpretation is not important. We know very well that a name or an aroma does not taste of anything, and that peacefulness does not have a colour, nevertheless we enjoy the sound and beauty of the language. However, what if that were not the case? What if a name and an aroma did have a flavour, or a state of calmness did have a colour?

Generally, we associate shapes and colours with our sense of sight; touch, takes us to our appreciation of textures and our sense of taste is responsible for flavours, but there is a small group of people, about four percent of the population according to the latest estimates, who assimilate various sensations together in one and the same perception. They are called synesthetes. They hear colours, they touch an object and have the sensation of taste or see sounds. They are surprised that in their environment people do not know that number four is yellow, for example, or that tobacco has a very sharp sound. They have double the information that the rest of us are lacking.

This is not the result of a psychotropic journey or any mental disorder, it is a simple curiosity, where the senses create a rather unique mental blend and interpret sensations in a different way than the rest of us mere mortals are used to. Just like how, a few days ago, a synesthete assured us that red wine is yellow, because they see the oak as yellow. The rest of the group identified the ageing aromas but nothing more.

There are different degrees of synesthesia, and there is a theory that assures us that everyone is born as a synesthete, but as we develop and grow, the sensory information process separates into different compartments. The neuroscientist, David Eagleman believes that, to a certain degree, we are probably all synesthetes, even though we are not aware of it.

The senses have very personal descriptions, which means that what may seem obvious for some, because we know it, we experience it and we see it, is not so obvious for others because they do not share the same experience. If also we have this “certain degree” of synesthesia that, apparently, we are all adding to our bag of personal experiences, we see that a description is the most subjective thing in the world. The difficulty that one and the same sensation is perceived in the same way by two different people does exist, but we have language to close the distances.

It is much nicer to say that a wine is cardinal red, as my friend Carlos Delgado says, than explaining that it is between vermillion and dark carmine (which only a few people really know what they are) or to be even more exact, that it is Pantone 227c. The Chinese do not care much for nuances when it comes to hòng (red) because it is always a synonym of beauty and luck, although in Chinese culture the favourite tone is what the fashion experts call Valentine red, which is like saying Pantone OXWO-C. Confusing? Let’s let our imagination fly and avoid impossible, corny and snobbish descriptions, and instead let’s put into words, with or without synaesthesia, the emotion of describing a wine in a very personal, non-mechanical way.