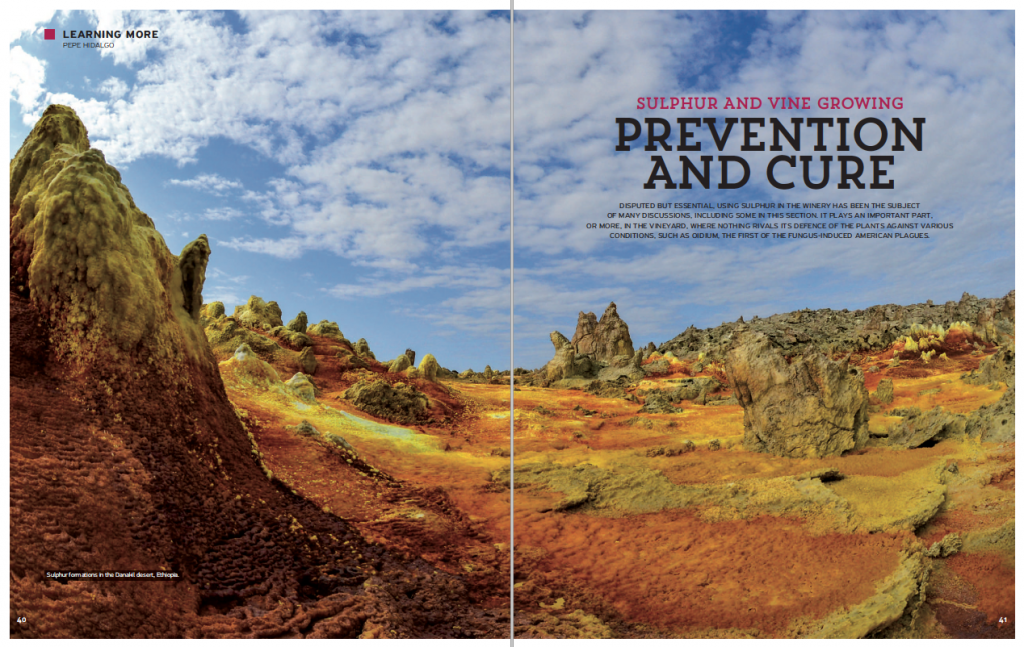 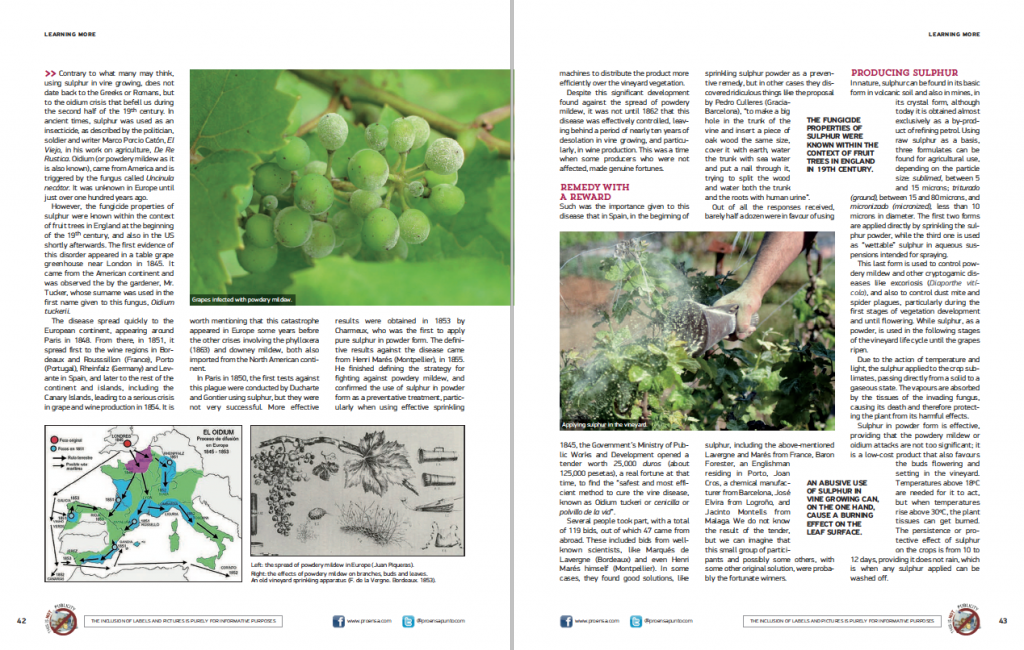 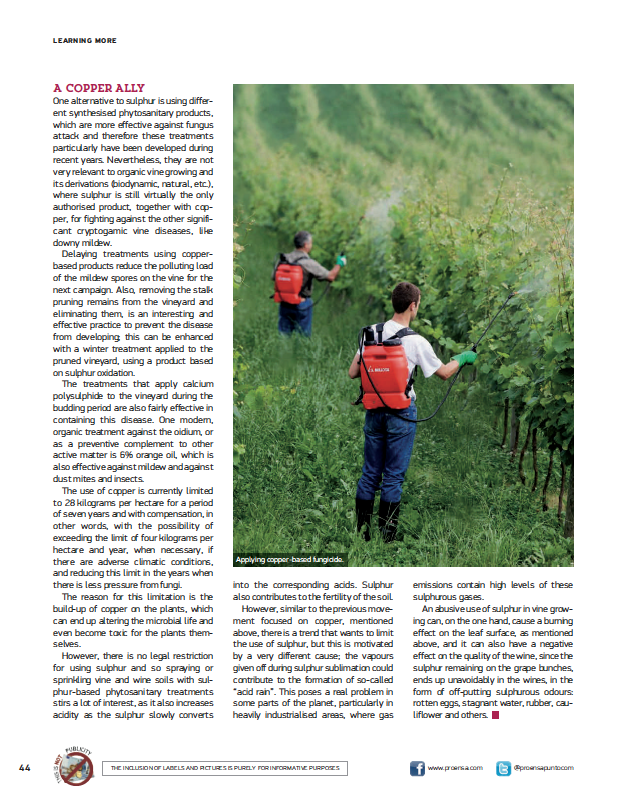 Disputed but essential, using sulphur in the winery has been the subject of many discussions, including some in this section. It plays an important part, or more, in the vineyard, where nothing rivals its defence of the plants against various conditions, such as oidium, the first of the fungus-induced American plagues.

Contrary to what many may think, using sulphur in vine growing, does not date back to the Greeks or Romans, but to the oidium crisis that befell us during the second half of the 19th century. In ancient times, sulphur was used as an insecticide, as described by the politician, soldier and writer Marco Porcio Catón, El Viejo, in his work on agriculture, De Re Rustica. Oidium (or powdery mildew as it is also known), came from America and is triggered by the fungus called Uncinula necátor. It was unknown in Europe until just over one hundred years ago.

However, the fungicide properties of sulphur were known within the context of fruit trees in England at the beginning of the 19th century, and also in the US shortly afterwards. The first evidence of this disorder appeared in a table grape greenhouse near London in 1845. It came from the American continent and was observed the by the gardener, Mr. Tucker, whose surname was used in the first name given to this fungus, Oidium tuckerii.

The disease spread quickly to the European continent, appearing around Paris in 1848. From there, in 1851, it spread first to the wine regions in Bordeaux and Rousssillon (France), Porto (Portugal), Rheinfalz (Germany) and Levante in Spain, and later to the rest of the continent and islands, including the Canary Islands, leading to a serious crisis in grape and wine production in 1854. It is worth mentioning that this catastrophe appeared in Europe some years before the other crises involving the phylloxera (1863) and downey mildew, both also imported from the North American continent.

In Paris in 1850, the first tests against this plague were conducted by Ducharte and Gontier using sulphur, but they were not very successful. More effective results were obtained in 1853 by Charmeux, who was the first to apply pure sulphur in powder form. The definitive results against the disease came from Henri Marés (Montpellier), in 1855. He finished defining the strategy for fighting against powdery mildew, and confirmed the use of sulphur in powder form as a preventative treatment, particularly when using effective sprinkling machines to distribute the product more efficiently over the vineyard vegetation.

Despite this significant development found against the spread of powdery mildew, it was not until 1862 that this disease was effectively controlled, leaving behind a period of nearly ten years of desolation in vine growing, and particularly, in wine production. This was a time when some producers who were not affected, made genuine fortunes.

Remedy with a reward

Such was the importance given to this disease that in Spain, in the beginning of 1845, the Government’s Ministry of Public Works and Development opened a tender worth 25,000 duros (about 125,000 pesetas), a real fortune at that time, to find the “safest and most efficient method to cure the vine disease, known as Oidium tuckeri or cenicilla or polvillo de la vid”.

Several people took part, with a total of 119 bids, out of which 47 came from abroad. These included bids from well-known scientists, like Marqués de Lavergne (Bordeaux) and even Henri Marés himself (Montpellier). In some cases, they found good solutions, like sprinkling sulphur powder as a preventive remedy, but in other cases they discovered ridiculous things like proposal by Pedro Culleres (Gracia-Barcelona), “to make a big hole in the trunk of the vine and insert a piece of oak wood the same size, cover it with earth, water the trunk with sea water and put a nail through it, trying to split the wood and water both the trunk and the roots with human urine”.

Out of all the responses received, barely half a dozen was in favour of using sulphur, including the above-mentioned Lavergne and Marés from France, Baron Forester, an Englishman residing in Porto, Joan Cros, a chemical manufacturer from Barcelona, José Elvira from Logroño, and Jacinto Montells from Malaga. We do not know the result of the tender, but we can imagine that this small group of participants and possibly some others, with some other original solution, were probably the fortunate winners.

In nature, sulphur can be found in its basic form in volcanic soil and also in mines, in its crystal form, although today it is obtained almost exclusively as a by-product of refining petrol. Using raw sulphur as a basis, three formulates can be found for agricultural use, depending on the particle size: sublimed, between 5 and 15 microns; triturado (ground), between 15 and 80 microns, and micronizado (micronized), less than 10 microns in diameter. The first two forms are applied directly by sprinkling the sulphur powder, while the third one is used as “wettable” sulphur in aqueous suspensions to apply it by spraying.

This last form is used to control powdery mildew and other cryptogamic diseases like excoriosis (Diaporthe vitícola), and also to control dust mite and spider plagues, particularly during the first stages of vegetation development and until flowering. While sulphur, as a powder, is used in the following stages of the vineyard life cycle until the grapes ripen.

Due to the action of temperature and light, the sulphur applied to the crop sublimates, passing directly from a solid to a gaseous state. The vapours are absorbed by the tissues of the invading fungus, causing its death and therefore protecting the plant from its harmful effects.

Sulphur in powder form is effective, providing that the powdery mildew or oidium attacks are not too significant; it is a low-cost product that also favours the buds flowering and setting in the vineyard. Temperatures above 18ºC are needed for it to act, but when temperatures rise above 30ºC, the plant tissues can get burned. The persistence or protective effect of sulphur on the crops is from 10 to 12 days, providing it does not rain, which is when any sulphur applied can be washed off.

One alternative to sulphur is using different synthesised phytosanitary products, which are more effective against fungus attack and therefore these treatments particularly have been developed during recent years. Nevertheless, they are not very relevant to organic vine growing and its derivations (biodynamic, natural, etc.), where sulphur is still virtually the only authorised product, together with copper, for fighting against the other significant cryptogamic vine diseases, like downy mildew.

Delaying treatments using copper-based products reduce the polluting load of the mildew spores on the vine for the next campaign. Also, removing the stalk pruning remains from the vineyard and eliminating them, is an interesting and effective practice to prevent the disease from developing; this can be enhanced with a winter treatment applied to the pruned vineyard, using a product based on sulphur oxidation.

The treatments that apply calcium polysulphide to the vineyard during the budding period are also fairly effective in containing this disease. One modern, organic treatment against the oidium, or as a preventive complement to other active matter is 6% orange oil, which is also effective against mildew and against dust mites and insects.

The use of copper is currently limited to 28 kilograms per hectare for a period of seven years and with compensation, in other words, with the possibility of exceeding the limit of four kilograms per hectare and year, when necessary, if there are adverse climatic conditions, and reducing this limit in the years when there is less pressure from fungi.

The reason for this limitation is the build-up of copper on the plants, which can end up altering the microbial life and even become toxic for the plants themselves.

However, there is no legal restriction for using sulphur and so spraying or sprinkling vine and wine soils with sulphur-based phytosanitary treatments stirs a lot of interest, as it also increases acidity as the sulphur slowly converts into the corresponding acids. Sulphur also contributes to the fertility of the soil.

However, similar to the previous movement focused on copper, mentioned above, there is a trend that wants to limit the use of sulphur, but this is motivated by a very different cause; the vapours given off during sulphur sublimation could contribute to the formation of so-called “acid rain”. This poses a real problem in some parts of the planet, particularly in heavily industrialised areas, where gas emissions contain high levels of these sulphurous gases.

An abusive use of sulphur in vine growing can, on the one hand, cause a burning effect on the leaf surface, as mentioned above, and it can also have a negative effect on the quality of the wine, since the sulphur remaining on the grape bunches, ends up unavoidably in the wines, in the form of off-putting sulphurous odours: rotten eggs, stagnant water, rubber, cauliflower and others.