The Shelf of Eduardo Martín Mazas

The Shelf of Eduardo Martín Mazas 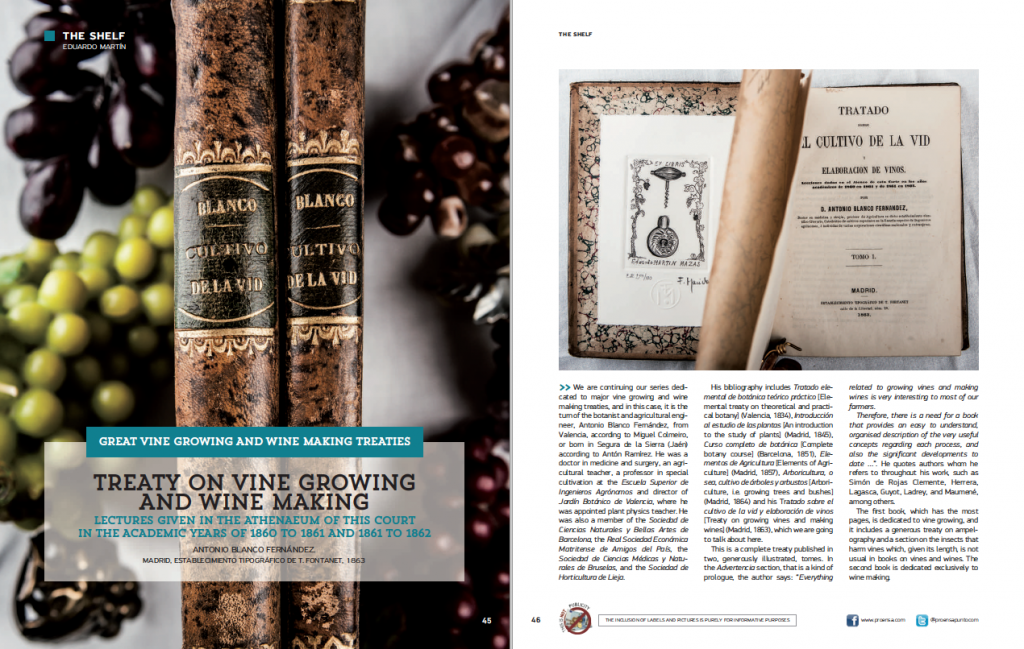 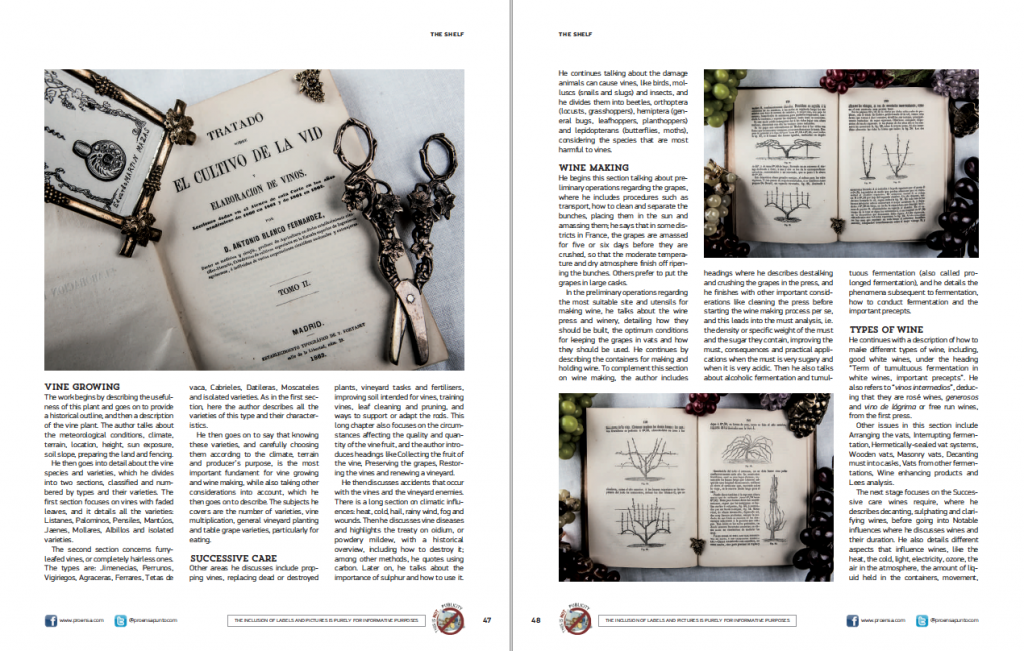 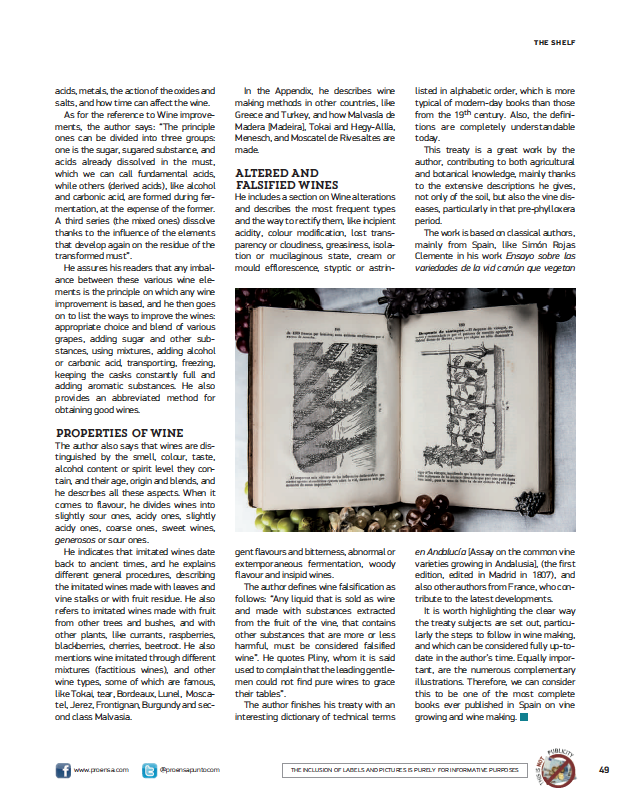 We are continuing our series dedicated to major vine growing and wine making treaties, and in this case, it is the turn of the botanist and agricultural engineer, Antonio Blanco Fernández, from Valencia, according to Miguel Colmeiro, or born in Segura de la Sierra (Jaén) according to Antón Ramírez. He was a doctor in medicine and surgery, an agricultural teacher, a professor in special cultivation at the Escuela Superior de Ingenieros Agrónomos and director of Jardín Botánico de Valencia, where he was appointed plant physics teacher. He was also a member of the Sociedad de Ciencias Naturales y Bellas Artes de Barcelona, the Real Sociedad Económica Matritense de Amigos del País, the Sociedad de Ciencias Médicas y Naturales de Bruselas, and the Sociedad de Horticultura de Lieja.

This is a complete treaty published in two, generously illustrated, tomes. In the Advertencia section, that is a kind of prologue, the author says: “Everything related to growing vines and making wines is very interesting to most of our farmers. Therefore, there is a need for a book that provides an easy to understand, organised description of the very useful concepts regarding each process, and also the significant developments to date …”. He quotes authors whom he refers to throughout his work, such as Simón de Rojas Clemente, Herrera, Lagasca, Guyot, Ladrey, and Maumené, among others.

The first book, which has the most pages, is dedicated to vine growing, and it includes a generous treaty on ampelography and a section on the insects that harm vines which, given its length, is not usual in books on vines and wines. The second book is dedicated exclusively to wine making.

The work begins by describing the usefulness of this plant and goes on to provide a historical outline, and then a description of the vine plant. The author talks about the meteorological conditions, climate, terrain, location, height, sun exposure, soil slope, preparing the land and fencing.

He then goes into detail about the vine species and varieties, which he divides into two sections, classified and numbered by types and their varieties. The first section focuses on vines with faded leaves, and it details all the varieties: Listanes, Palominos, Pensiles, Mantúos, Jaenes, Mollares, Albillos and isolated varieties.

The second section concerns furry-leafed vines, or completely hairless ones. The types are: Jimenecias, Perrunos, Vigiriegos, Agraceras, Ferrares, Tetas de vaca, Cabrieles, Datileras, Moscateles and isolated varieties. As in the first section, here the author describes all the varieties of this type and their characteristics.

He then goes on to say that knowing these varieties, and carefully choosing them according to the climate, terrain and producer’s purpose, is the most important fundament for vine growing and wine making, while also taking other considerations into account, which he then goes on to describe. The subjects he covers are the number of varieties, vine multiplication, general vineyard planting and table grape varieties, particularly for eating.

Other areas he discusses include propping vines, replacing dead or destroyed plants, vineyard tasks and fertilisers, improving soil intended for vines, training vines, leaf cleaning and pruning, and ways to support or adapt the rods. This long chapter also focuses on the circumstances affecting the quality and quantity of the vine fruit, and the author introduces headings like Collecting the fruit of the vine, Preserving the grapes, Restoring the vines and renewing a vineyard.

He then discusses accidents that occur with the vines and the vineyard enemies. There is a long section on climatic influences: heat, cold, hail, rainy wind, fog and wounds. Then he discusses vine diseases and highlights the treaty on oidium, or powdery mildew, with a historical overview, including how to destroy it; among other methods, he quotes using carbon. Later on, he talks about the importance of sulphur and how to use it. He continues talking about the damage animals can cause vines, like birds, molluscs (snails and slugs) and insects, and he divides them into beetles, orthoptera (locusts, grasshoppers), hemiptera (general bugs, leafhoppers, planthoppers) and lepidopterans (butterflies, moths), considering the species that are most harmful to vines.

He begins this section talking about preliminary operations regarding the grapes, where he includes procedures such as transport, how to clean and separate the bunches, placing them in the sun and amassing them; he says that in some districts in France, the grapes are amassed for five or six days before they are crushed, so that the moderate temperature and dry atmosphere finish off ripening the bunches. Others prefer to put the grapes in large casks.

In the preliminary operations regarding the most suitable site and utensils for making wine, he talks about the wine press and winery, detailing how they should be built, the optimum conditions for keeping the grapes in vats and how they should be used. He continues by describing the containers for making and holding wine.

To complement this section on wine making, the author includes headings where he describes destalking and crushing the grapes in the press, and he finishes with other important considerations like cleaning the press before starting the wine making process per se, and this leads into the must analysis, i.e. the density or specific weight of the must and the sugar they contain, improving the must, consequences and practical applications when the must is very sugary and when it is very acidic. Then he also talks about alcoholic fermentation and tumultuous fermentation (also called prolonged fermentation), and he details the phenomena subsequent to fermentation, how to conduct fermentation and the important precepts.

He continues with a description of how to make different types of wine, including, good white wines, under the heading “Term of tumultuous fermentation in white wines, important precepts”. He also refers to “vinos intermedios”, deducing that they are rosé wines, generosos and vino de lágrima or free run wines, from the first press.

Other issues in this section include Arranging the vats, Interrupting fermentation, Hermetically-sealed vat systems, Wooden vats, Masonry vats, Decanting must into casks, Vats from other fermentations, Wine enhancing products and Lees analysis.

The next stage focuses on the Successive care wines require, where he describes decanting, sulphating and clarifying wines, before going into Notable influences where he discusses wines and their duration.

He also details different aspects that influence wines, like the heat, the cold, light, electricity, ozone, the air in the atmosphere, the amount of liquid held in the containers, movement, acids, metals, the action of the oxides and salts, and how time can affect the wine.

As for the reference to Wine improvements, the author says: “The principle ones can be divided into three groups: one is the sugar, sugared substance, and acids already dissolved in the must, which we can call fundamental acids, while others (derived acids), like alcohol and carbonic acid, are formed during fermentation, at the expense of the former. A third series (the mixed ones) dissolve thanks to the influence of the elements that develop again on the residue of the transformed must.”

He assures his readers that any imbalance between these various wine elements is the principle on which any wine improvement is based, and he then goes on to list the ways to improve the wines: appropriate choice and blend of various grapes, adding sugar and other substances, using mixtures, adding alcohol or carbonic acid, transporting, freezing, keeping the casks constantly full and adding aromatic substances. He also provides an abbreviated method for obtaining good wines.

The author also says that wines are distinguished by the smell, colour, taste, alcohol content or spirit level they contain, and their age, origin and blends, and he describes all these aspects. When it comes to flavour, he divides wines into slightly bitter ones, acidy ones, slightly sweet bitter ones, coarse ones, sweet wines, generosos and bitter ones.

He indicates that imitated wines date back to ancient times, and he explains different general procedures, describing the imitated wines made with leaves and vine stalks or with fruit residue. He also refers to imitated wines made with fruit from other trees and bushes, and with other plants, like currants, raspberries, blackberries, cherries, beetroot. He also mentions wine imitated through different mixtures (factitious wines), and other wine types, some of which are famous, like Tokai, tear, Bordeaux, Lunel, Moscatel, Jerez, Frontignan, Burgundy and second class Malvasia.

In the Appendix, he describes wine making methods in other countries, like Greece and Turkey, and how Malvasía de Madera [Madeira], Tokai and Hegy-Allía, Menesch, and Moscatel de Rivesaltes are made.

He includes a section on Wine alterations and describes the most frequent types and the way to rectify them, like incipient acidity, colour modification, lost transparency or cloudiness, greasiness, isolation or mucilaginous state, cream or mould efflorescence, styptic or astringent flavours and bitterness, abnormal or extemporaneous fermentation, woody flavour and insipid wines.

The author defines wine falsification as follows: “Any liquid that is sold as wine and made with substances extracted from the fruit of the wine, that contains other substances that are more or less harmful, must be considered falsified wine”. He quotes Pliny, whom it is said used to complain that the leading gentlemen could not find pure wines to grace their tables.”

The author finishes his treaty with an interesting dictionary of technical terms listed in alphabetic order, which is more typical of modern-day books than those from the 19th century. Also, the definitions are completely understandable today.

This treaty is a great work by the author, contributing to both agricultural and botanical knowledge, mainly thanks to the extensive descriptions he gives, not only of the soil, but also the vine diseases, particularly in that pre-phylloxera period.

The work is based on classical authors, mainly from Spain, like Simón Rojas Clemente in his work Ensayo sobre las variedades de la vid común que vegetan en Andalucía [Assay on the common vine varieties growing in Andalusia], (the first edition, edited in Madrid in 1807), and also other authors from France, who contribute to the latest developments.

It is worth highlighting the clear way the treaty subjects are set out, highlighting the steps to follow in wine making, and which can be considered fully up-to-date in the author’s time. Equally important, are the numerous complementary illustrations. Therefore, we can consider this to be one of the most complete books ever published in Spain on vine growing and wine making.