On a wine tour around Madrid, Barrio de las Letras

On a wine tour around Madrid, Barrio de las Letras 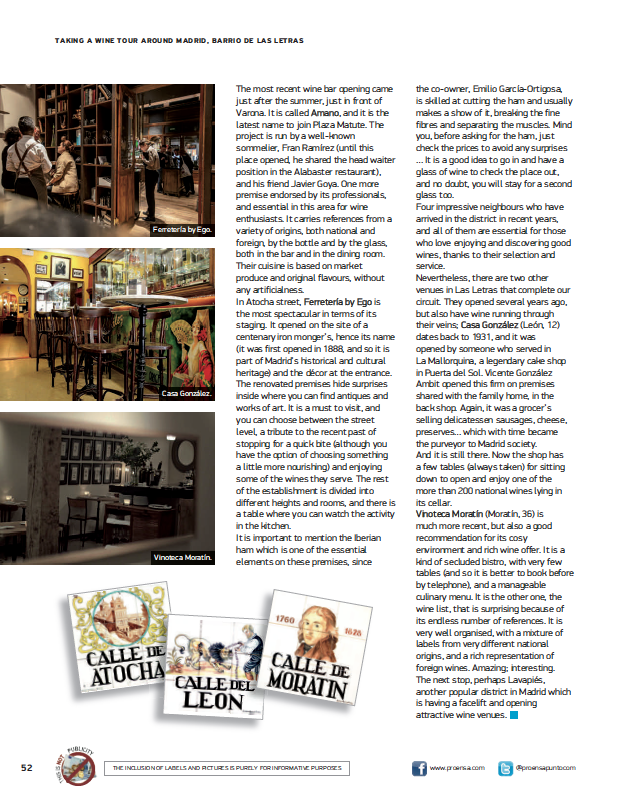 Historical, literary and full of plaques in remembrance of its famous neighbours, the Las Letras district in Madrid is one of the most popular with tourists. No doubt, the fact that it lies in the centre of the capital is also a big advantage. It is a privileged location, with pros and cons (just like this article), pedestrian streets and a night-time atmosphere for cocktails and particularly, beer which has some very traditional references like the Cervecería Alemana or Naturbier, in Plaza de Santa Ana, or La Dolores and La Fábrica, on the corners of Duque de Medinaceli with Lope de Vega, as well as other nearby premises. However, they all have a reasonable chapter on wines that is a little more decent that the average found in some bars.

In Lope de Vega, just a few steps away from the alleged tomb of Velázquez, we find the HQ of Unión Española de Catadores, which is like an embassy for the wine world in a traditional cocktail area, and, next to this, there is Casa Mariano often frequented by wine personalities visiting the UEC to give talks, and who then relax with a glass of wine or caña to wash down the famous torreznos and fried almonds.

The first thing to do is define an area: between Plaza Jacinto Benavente, Atocha street, the Prado and San Jerónimo street where you join up with the Congress. This area includes several well-known names such as Huertas, Prado, Echegaray and Plaza de Santa Ana, and it is a splendid place for anyone visiting the city because it is so easy to get to; however, it is complicated if you are looking for well-cared for and respectable, quality restaurants. Due to the crowds that meet here, from all over Spain and the world, the eating and drinking options have adopted other styles… apart from some very dignified exceptions, which are always recommendable meeting places for locals, neighbours and the usual clientele, like the main parish. And obviously, there are always plenty of visitors, but the real tourist masses do not come this way.

Nevertheless, there are already several groups set on changing things and opening establishments that have nothing to do with the businesses that have triumphed in this district. And the truth is that some premises are undergoing some interesting renovations which have gradually brought back clients who have not been here for years. For example, Viva Madrid (Manuel Fernández y González, 7) was a much talked-about re-opening; a historic tavern in las Letras that re-opened its doors under the guidance of Ricardo García and the well-known Diego Cabrera, a name which no doubt increased the expectancy and delight of many before its opening; what is more, it has attracted people to this local district who have never been here before. It has plenty more glamour than before, but still maintains its tavern airs, and although its speciality is aperitifs and cocktails, it serves other proposals introduced later just as well.

You see, this part of the capital has been going through an interesting and necessary renovation for years. The hotels that have opened in the area are a sign of this, and so it was just a question of time before the different restaurants arrived (with a well-presented offer) and good venues for wines. So, although it is true that the district has a slant for beer, for the last two or three years, in just a few square metres, Las Letras has combined four wine venues worthy of attention and a visit, as they are meant to be enjoyed.

Alimentación Quiroga (Huertas, 19), Casa Varona (plaza Matute, 13), Amano (plaza Matute, 4) and La Ferretería (Atocha, 57) have become essential now for anyone who wants to enjoy a good wine and, given their proximity, they often support each other. Seeing how well these wine bars have been received, it seems quite likely that others will follow. They are popular because they provide a good offer, good attention and good products, and these are the keys to their success, and also the fact that they are run by good connoisseurs.

Juan Carlos Henche, who was associated for many years with the Osborne group, runs the new Alimentación Quiroga. It was first opened in 1958, as a grocer’s shop, and has now been turned into a tasting outlet. It carries top level products (preserves, delicatessen sausages, cheese, dairy produce…), which you can buy or enjoy on the premises, together with a very wide offer of wines by the glass and the bottle. These are showcased in view of the customers, who can select whichever label they want. They also serve a few dishes such as salads, toasts and a warm seasonal stew.

The second wine bar opened less than a year ago, and has opened on the site of one of the district’s historical venues. What used to be Mantequería Cabello, another grocer’s, is now Casa Varona. We could say that it is a sibling venue, and an alternative when Quiroga fills up, which happens quite regularly, particularly on weekends, when trying to get a table is a matter of patience and good luck. So, Varona is like a continuation with the same philosophy, and the premises divided into different areas. As for the rest, the products are on view, the cuisine is simple with no frills, and there are wines for everyone including very well-known labels, not so well-known labels and some that are not known at all. Added value always.

Just to clarify things, in these two venues and the others, the service is impeccable, at last for Letras!… including the appropriate glassware. And what is more, another common feature are the aesthetical additions, arranged with taste and careful attention to detail.

The most recent wine bar opening came just after the summer, just in front of Varona. It is called Amano,and it isthe latest name to join Plaza Matute. The project is run by a well-known sommelier, Fran Ramírez (until this place opened, he shared the head waiter position in the Alabaster restaurant), and his friend Javier Goya. One more premise endorsed by its professionals, and essential in this area for wine enthusiasts. It carries references from a variety of origins, both national and foreign, by the bottle and by the glass, both in the bar and in the dining room. Their cuisine is based on market produce and original flavours, without any artificialness.

In Atocha street, Ferreteríaby Ego is the most spectacular in terms of its staging. It opened on the site of a centenary iron monger’s, hence its name (it was first opened in 1888, and so it is part of Madrid’s historical and cultural heritage) and the décor at the entrance. The renovated premises hide surprises inside where you can find antiques and works of art. It is a must to visit, and you can choose between the street level, a tribute to the recent past of stopping for a quick bite (although you have the option of choosing something a little more nourishing) and enjoying some of the wines they serve. The rest of the establishment is divided into different heights and rooms, and there is a table where you can watch the activity in the kitchen.

It is important to mention the Iberian ham which is one of the essential elements on these premises, since the co-owner, Emilio García-Ortigosa, is skilled at cutting the ham and usually makes a show of it, breaking the fine fibres and separating the muscles. Mind you, before asking for the ham, just check the prices to avoid any surprises … It is a good idea to go in and have a glass of wine to check the place out, and no doubt, you will stay for a second glass too.

Four impressive neighbours who have arrived in the district in recent years, and all of them are essential for those who love enjoying and discovering good wines, thanks to their selection and service. Nevertheless, there are two other venues in Las Letras that complete our circuit. They opened several years ago, but also have wine running through their veins; Casa González (León, 12) dates back to 1931, and it was opened by someone who served in La Mallorquina, a legendary cake shop in Puerta del Sol. Vicente González Ambit opened this firm on premises shared with the family home, in the back shop. Again, it was a grocer’s selling delicatessen sausages, cheese, preserves… which with time became the purveyor to Madrid society. And it is still there. Now the shop has a few tables (always taken) for sitting down to open and enjoy one of the more than 200 national wines lying in its cellar.

Vinoteca Moratín (Moratín, 36)is much more recent, but also a good recommendation for its cosy environment and rich wine offer. It is a kind of secluded bistro, with very few tables (and so it is better to book before by telephone), and a manageable culinary menu. It is the other one, the wine list, that is surprising because of its endless number of references. It is very well organised, with a mixture of labels from very different national origins, and a rich representation of foreign wines. Amazing; interesting.

The next stop, perhaps Lavapiés, another popular district in Madrid which is having a facelift and opening attractive wine venues.